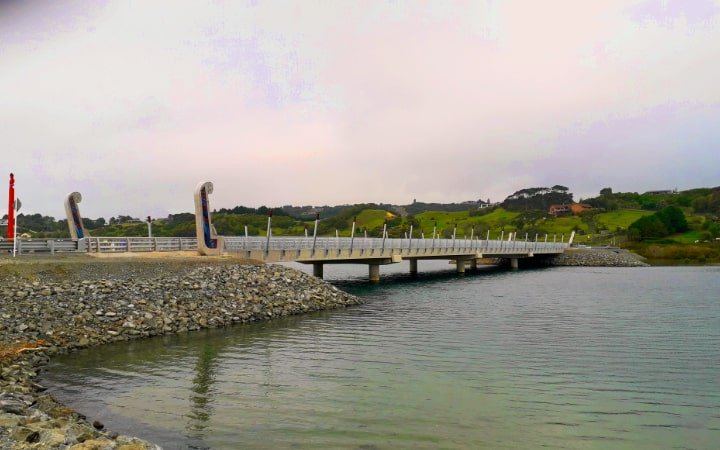 The Far North is celebrating the opening of a new two-lane bridge at Taipa.

Labeled the ‘smartest bridge in New Zealand’, the new wifi-enabled, two-lane with street lights positioned at both ends of the road adjacent to the bridge also come with a hub giving the community free access to wifi.

This weekend marked the official handover of the bridge to the community.

Hundreds of people from the local community joined local hapū, business and community representatives and its construction partners at the event, which started with a dawn blessing and the unveiling of the carved wood inserts on the waka end panels adorning both ends of the bridge.

The pou whenua and a plaque at the relocated war memorial were also unveiled.

The new $19m bridge is 107 metres long, with two lanes of traffic and a 2.5 metre walking and cycling shared path. Its most striking feature is the waka tauihu (prow) and taurapa (stern) end panels of a seafaring waka adorning each end of the bridge structure. It acknowledges Taipā as one of the first landing places in New Zealand of the Polynesian explorer Kupe.

The waka hourua (a traditional double hulled sailing canoe) design and the pou whenua were the result of extensive collaboration between the Transport Agency and the local hapu representatives of Ngati Kahu.  The close relationship with Ngati Kahu saw the relocation of the old monument from the shop carpark to a more prominent and deserving location. The monument commemorates local fallen soldiers that have died in the line of duty.

Less than an hour before opening ceremonies commenced, locals were already doing backflips into the river below.